The Accelerating Medicines Partnership® (AMP®) program is a public-private partnership between the National Institutes of Health (NIH), multiple biopharmaceutical and life sciences companies, and non-profit organizations.

Managed through the Foundation for the NIH (FNIH), AMP aims to identify and validate the most promising biological targets for therapeutics. Disease areas covered by AMP at the launch of this site include Alzheimer’s disease, type 2 diabetes, the autoimmune disorders of rheumatoid arthritis and systemic lupus erythematosus (lupus) and Parkinson’s disease. Additional disease areas are being evaluated for addition to AMP.

In 2018, through FNIH, an AMP partnership between the National Institute of Neurological Disorders and Stroke (NINDS), National Institute on Aging (NIA), the Food and Drug Administration (FDA), GSK, Pfizer, Sanofi, Bristol-Myers Squibb, Verily and the Michael J. Fox Foundation for Parkinson's Research (MJFF) was launched for Parkinson’s disease (PD).  Aligning Science Across Parkinson's (ASAP) initiative joined the partnership in 2019 to expand project goals.

The research plan proposed for the AMP program in PD encompasses a deep molecular characterization and longitudinal clinical profiling of PD patient data and biosamples with the goal of identifying and validating diagnostic, prognostic and/or disease progression biomarkers for PD.

A critical component of this partnership is broad sharing of the AMP PD data and analyses with the biomedical community to advance research in PD.  AMP PD utilizes well characterized cohorts with existing biosamples and clinical data that were collected under comparable protocols and using common data elements.

Thank you to all of the research participants who have contributed data through BioFIND, GP2, HBS, LBD, LCC, PDBP, PPMI, STEADY-PD3, and SURE-PD3 and to all of the study teams who have collected and managed these data. AMP PD appreciates your contributions, which are fundamental to AMP PD resource development.

Why: Problem Statement for Parkinson’s Disease

Parkinson’s disease (PD) is a chronic and progressive neurological disease that is marked by tremors in the resting muscles, rigidity, slowness of movement, impaired balance and a shuffling gait. In addition, many people with PD develop non-motor symptoms such as behavioral changes and cognitive impairment.

Because the worldwide population is living longer, PD represents a significant and increasing threat to public health. In the United States alone it has been estimated that up to 1 million people may have PD. That number is expected to increase in the coming years, and the current annual cost of treatment for PD in the United States has been estimated at $14.4 billion.

Though it is a complex neurodegenerative disorder, the two primary hallmarks of PD are the progressive loss of dopamine-containing neurons in a specific area of the brain called the substantia nigra and the buildup within neurons of a protein, α-synuclein, into clusters called Lewy bodies.

The cause of PD has been linked to several genetic, epigenetic and environmental factors; however, the exact causes of neuronal death and Lewy body formation are not known.

Despite large investments in research and development, no disease-modifying drugs have been approved for PD. It has become clear that a breakthrough in this area will require strong and transformative public-private partnerships that can produce bold discoveries.

AMP is a public-private partnership managed by the FNIH. NIH and industry partners share expertise and resources in an integrated governance structure that enables the best-informed contributions to science from all participants.

Each AMP disease area has a steering committee comprising representatives from the administering NIH Institute, the FDA, industry, and nonprofit foundations. The disease-specific steering committees are managed by the FNIH under the direction of the AMP Executive Committee, which includes leaders from NIH, FDA, participating industry partners, and nonprofit foundations that include patient advocacy organizations.

The AMP PD program has several working groups that bring together subject matter experts from academia and industry. Face-to-face meetings organized by FNIH provide an additional venue for communication and coordination.

What: Goals for AMP PD

AMP PD aims to identify and validate diagnostic, prognostic, and progression biomarkers. This will improve clinical trial design and contribute to the identification of new pathways for therapeutic developments.

The goals of AMP PD are: 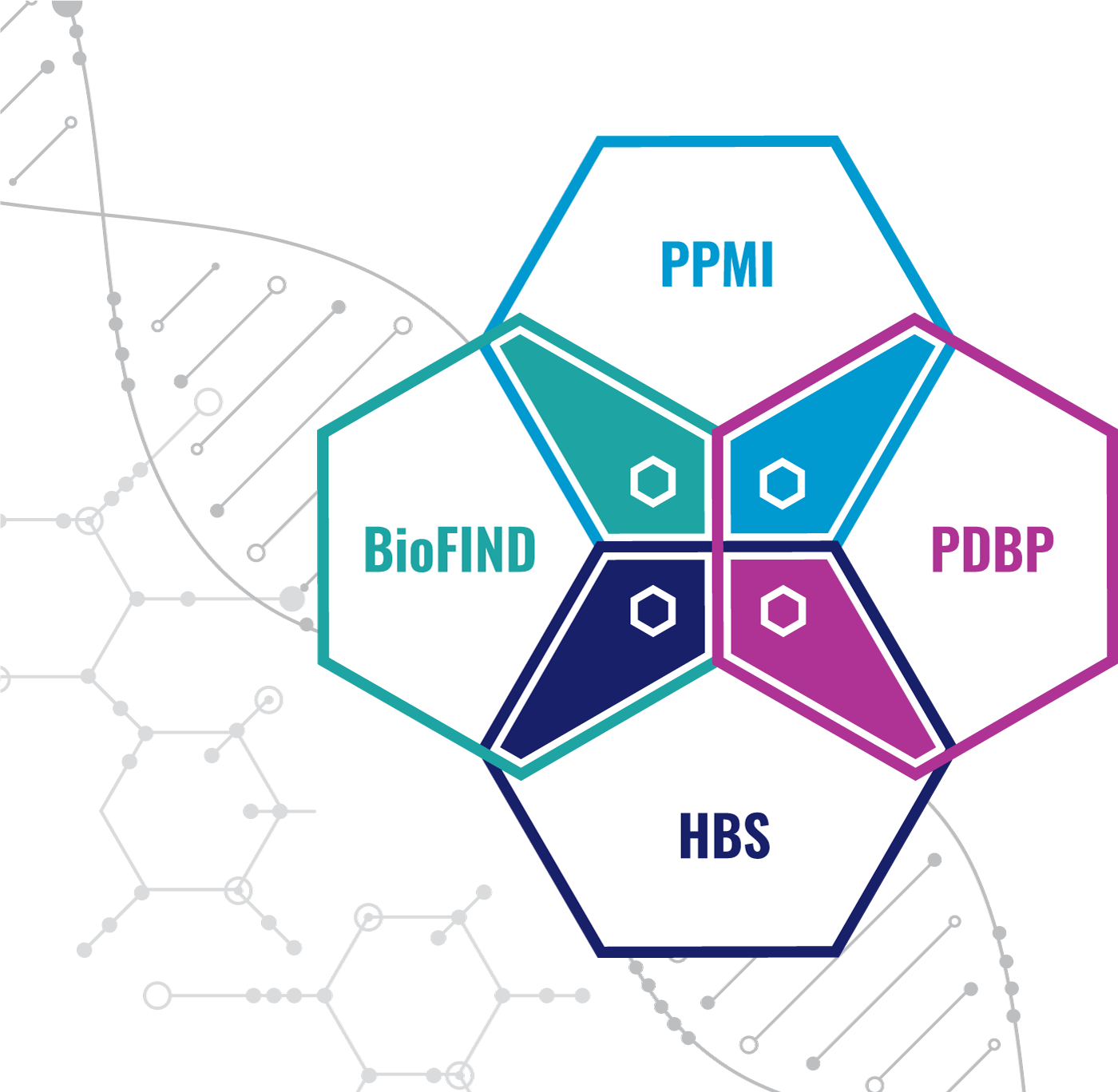 The MJFF and NINDS Study of Urate Elevation in Parkinson’s Disease, Phase 3 (SURE-PD3)

Foundation for the NIH (FNIH)

The FNIH, managing partner for AMP PD, is actively recruiting new industry and nonprofit partners. Inquiries about how your organization can join the partnership should be submitted to Stacey Adams, Neuroscience Research Partnerships, at sadam@fnih.org.